I'm going to stop crossposting to LJ. Comments are rare, and I feel sort of uneasy talking to an empty room. I am continuing to write (sometimes) at platypus.dreamwidth.org, and I'm happy to add anyone I know there. I'll leave comments open on this, and I'll always be happy to catch up with old LJ friends.

Does anyone actually use their LJ OpenID to read/comment on Dreamwidth? I'm thinking of removing all the OpenIDs from my friends (or circle or whatever Dreamwidth calls it).

I've been cleaning up my friends list, removing people I think are gone from LJ. This isn't some "comment or I will delete you" thing; if you're still active, I have no intention of unfriending you. But if you were lurking quietly and got removed, please let me know. I just felt weird giving reading access to a bunch of people who (I think) aren't here and don't care.

I'm going to keep crossposting from Dreamwidth, but if you're over there too, I'd appreciate being added (I'm platypus there too).

There's also a category of people I hope will come back someday and have no other contact information for, and I'll keep you all friended just in case. Haven't been here in a while? Got twitter, facebook, something else...? I'd love to hear from you.

Moly Trummer-Keys, born April 1 (estimated), 1997, died January 1, 2017. She was given up by some idiot when she was a year and a half old and named "Brownie." I fell in love with the friendly, perky, tiny little tortie through the cage bars at the rescue center, and adopted her the day I moved into my first proper post-college apartment. I was 24. We were together for the next eighteen years, whether in a tiny efficiency apartment in Madison or across the country in San Diego with the addition of Ken (and then Toeffe, and then Penny).

Moly tipped the scales at around five pounds. She had two brain cells, one devoted to being petted and the other to licking things. And somehow, packed into that tiny head was the sweetest, perkiest, most lovable being I have ever met. She was dumb as a box of rocks, but she had so much personality. I'm not even sure she knew she was a cat; presented with a feather on a stick, she'd ignore the feather but happily chew the string. She diligently licked the telephone, the mirror, our noses, the stairway railing, our desktops, our pillows, and the couch, if not stopped. Her hoarse little meow was sometimes mistaken for a hiss; she loved to talk, and would eagerly hold lengthy conversations of whispered meows. (We whisper-meowed back, of course.) She had to be taught, patiently, over the course of years, that Pounce treats were in fact edible food. (But we eventually got through to her. She ate five this morning.) She liked to socialize with our heads, perhaps because they were close to her size, and would often sit on the back of the couch while we watched TV, gradually cuddling into my neck.

It was hard to pet Moly to the point where she considered herself adequately petted and did not want more, but I tried. Every morning when I woke up she'd pop up perkily, meow at me, and lead me to my desk for a petting session. God forbid I try to walk anywhere else.

For such a loving cat, she wasn't a big purrer. She had only the tiniest, breathiest purr, and it was only unleashed under very specific circumstances. Ken knew just the purr spot to scratch on the back of her head; I never quite got the hang of that one. But sometimes she'd honor me with a little rattle under her breath.

She wasn't much of a bed cat, but once, a year or so ago, I woke up to her cuddling in the crook of my neck, purring right into my ear. I didn't get up for work on time that day.

She'd been getting old for a long time; I'd always dared to hope she'd make it to 18, and then go suddenly in her sleep with no lengthy illness beforehand. And she did make it to 18 -- even to 19, with only minor ailments. On her 19th birthday, I didn't dare ask the universe for 20, but still, she fell only a few months short. That last year was hard, though, with arthritis and kidney disease and then, in late summer, cancer. Her activities were gradually curtailed until she spent all her time on her blanket and heating pad. She developed urinary tract infections, and anemia, and pressure sores on her heels. We treated as much as we could, tried to keep her happy, but finally it reached the point where it was all just too much for her.

I've had good cats. I've even had special cats. But saying goodbye to Moly is probably the hardest thing I've ever had to do. My only comfort is that it was done well -- a mobile vet came to us, and Moly had no fear, no more pain. She got to lie on her blanket, on her heating pad, in the corner where she'd decided to spend her last months. I wanted her to die in her sleep, and that's basically what happened.

But she's gone, and I miss her like I'd miss my heart, and forgive me if I'm having a hard time with new year memes. I hope 2017 has not begun as it will go on. My first dollar spent this year went to help the most beloved cat I've ever known leave this life. I hope none of this is meaningful. I'm grateful for the last months we were granted together, and for all the times in the preceding years that I said, well, I don't know how long we'll have, so I'm going to sit here and pet this cat as long as she wants. So, please, go pet a cat in memory of Moly.

A month ago, I decided to see how long it would take me to see a license plate from every state. This is what I've got so far: 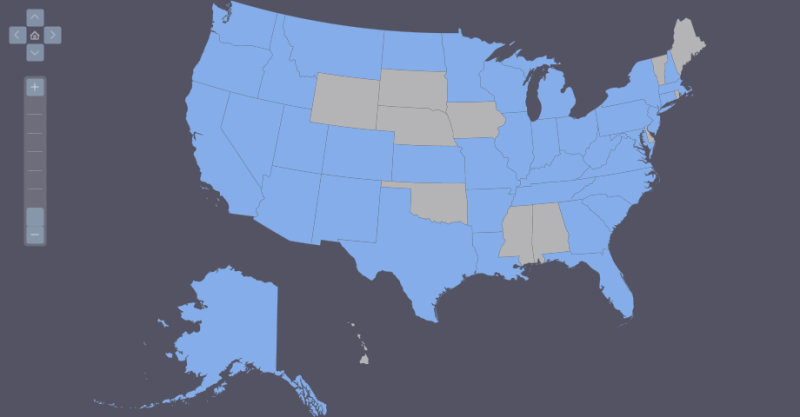 Not bad, huh? Although Indiana was a U-Haul, so that sort of felt like cheating. I'm still keeping my eye out for a proper Indiana plate.

Ken saw Maine yesterday, but I didn't, so it doesn't count.

I wasn't originally shooting for DC, but I saw a bonus DC plate last week (and got to talk to the guy whose car it was, because I was pointing at it and excitedly saying, "Look! DC!" as he walked up).

Hawaii isn't actually that uncommon here -- I'm a little surprised I haven't seen one in a month.

Some of these last few are going to be tough, though. Rhode Island? Delaware? Good luck with that. At least San Diego is a tourist destination.

Also, this is a stupid hobby for someone with eyesight as bad as mine. But it's been kind of fun. 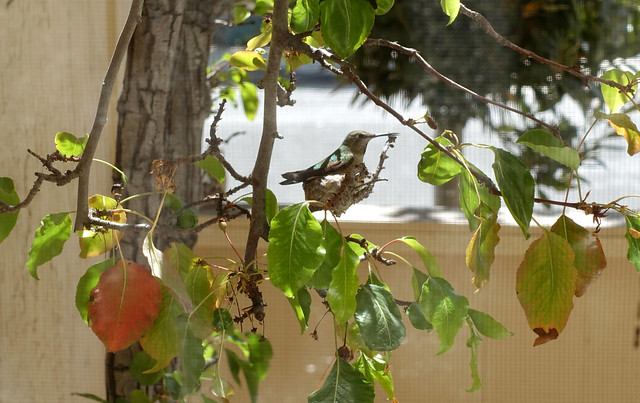 That's a foot away from our bathroom window. There's nothing much growing in our front door area, but she has chosen that spindly tree (it's apparently an "evergreen pear," but I lived here for nine years without knowing that because it's not very interesting) for a nest.

After three days' use, I'm pretty sure I can recommend this heated cat bed. Or, rather, Moly can: 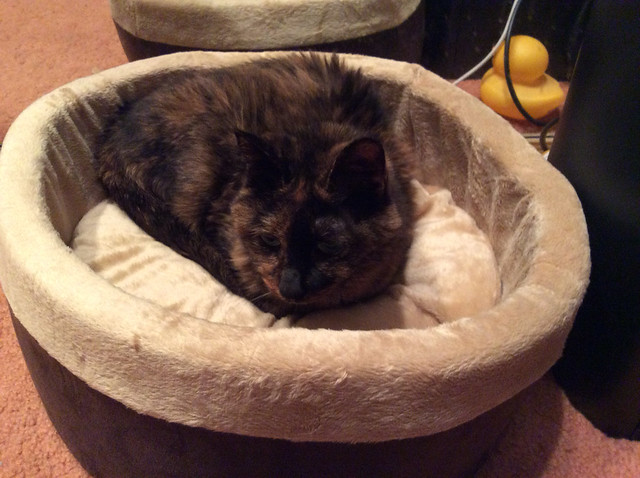 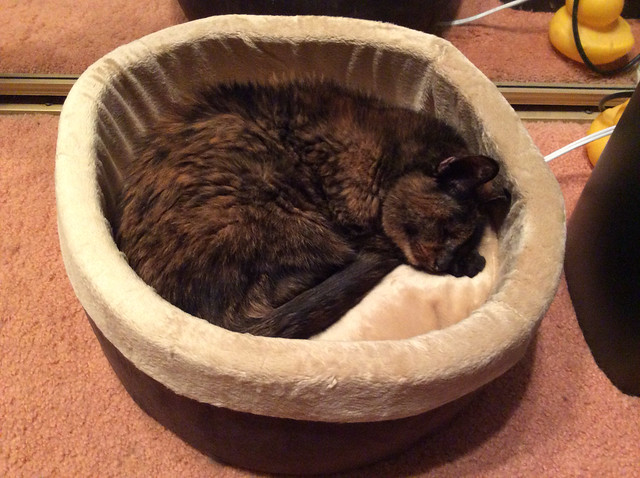 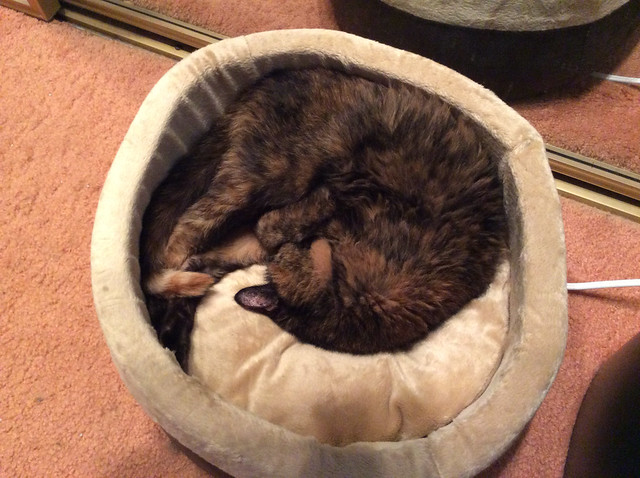 Moly was already a fan of "bowl" beds, so I was pretty sure she'd try it. And once she did, there was little getting her out of it. It's just a gentle warmth, but it's clearly enough to make a cat happy. (I did wonder, at first, if she was just sleeping in it because it was a bed, and not because it was warm, but she was never glued to her old bed like that.)

The other two cats never sleep in Moly's beds, so they haven't investigated or realized what they're missing. Hope it stays that way. (Er, not that I don't want them to be happy, but they're a lot bigger and furrier than Moly, and Toeffe already sleeps in bed with us, so it's not like they're deprived. It's tiny little Moly I worry about keeping warm.)

Open to: All, detailed results viewable to: All. Participants: 17

Where do you fall on the issue of candy corn?

My petunias remain the best 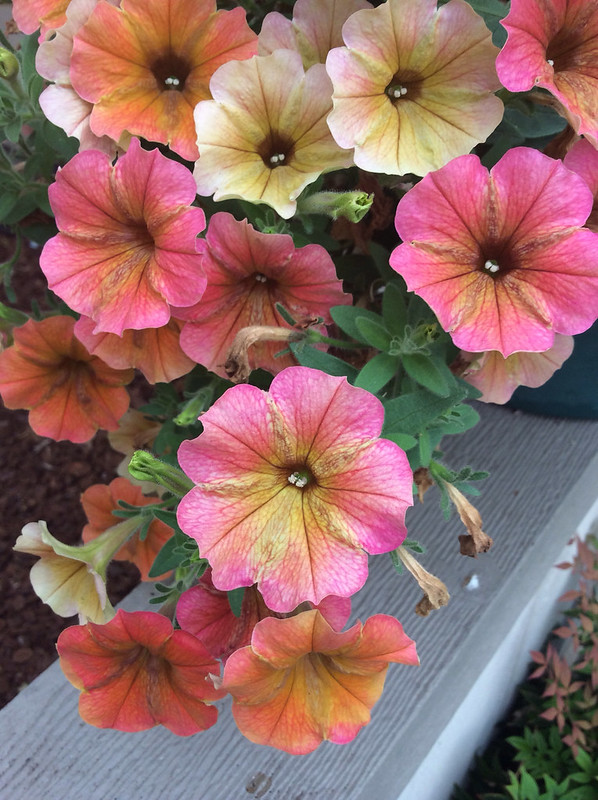 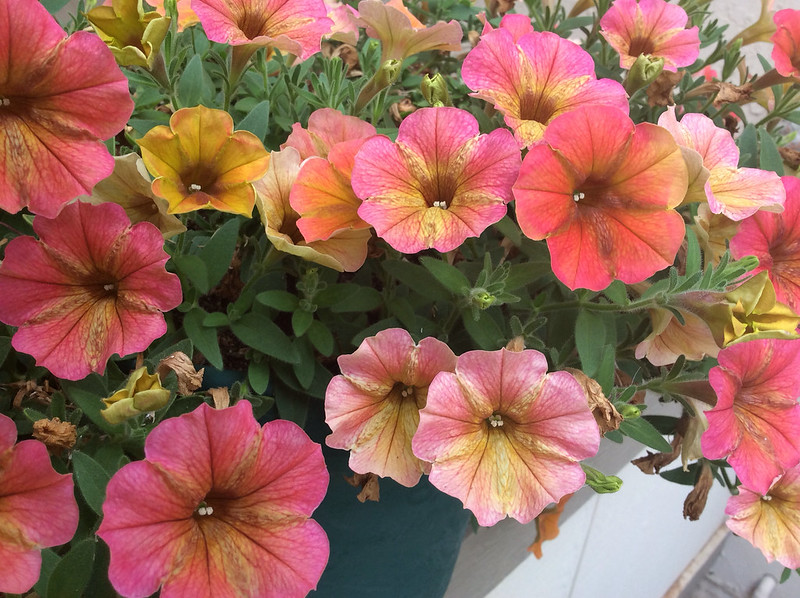 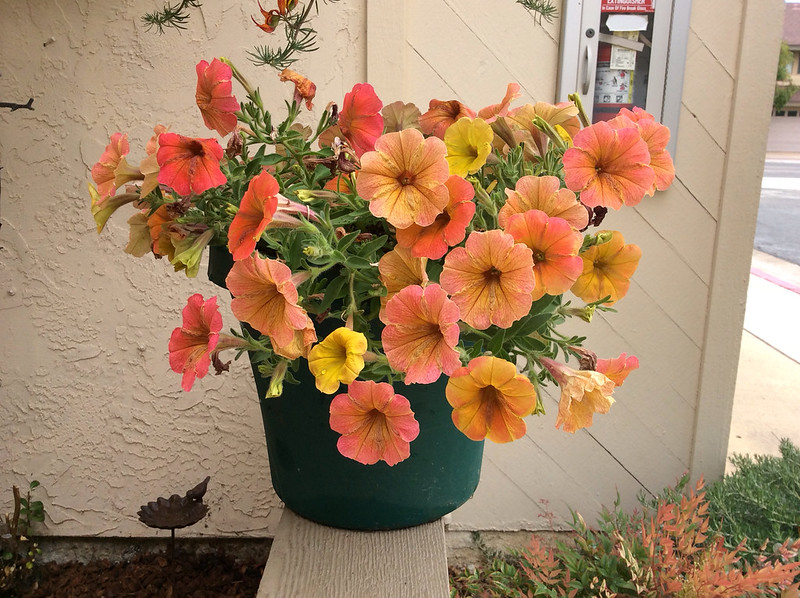 These are "Cascadias Indian Summer" petunias and they really are that color. All those colors. I couldn't resist a couple of plants when we went to the awesome garden center to get wood chips. 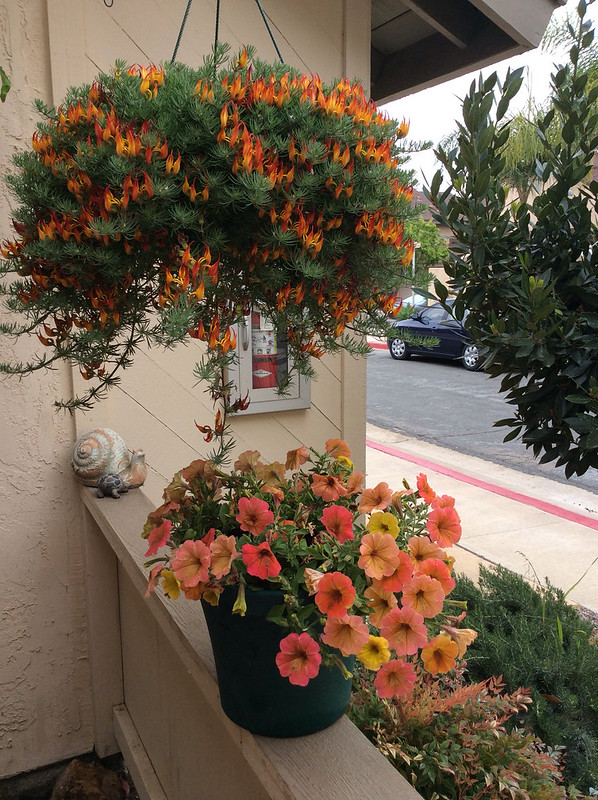 I also got a hanging basket of parrot's beak lotus vine, which I love. It's hard to keep up with its voracious need for water, and if you let it get dry just once, BAM, all the foliage turns yellow, but I'm doing okay so far.

Fifteen years ago today, I moved into a new apartment and brought a little cat home. 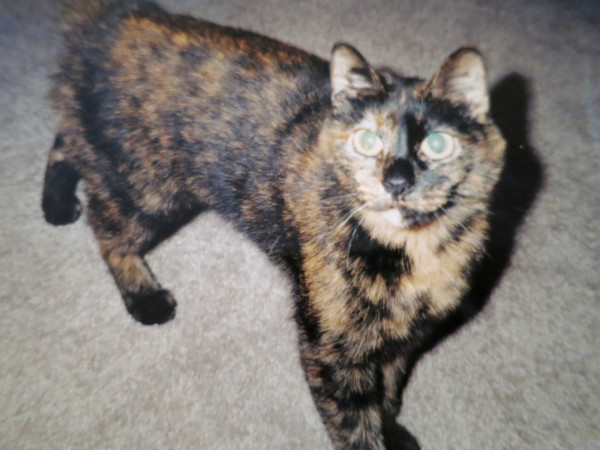 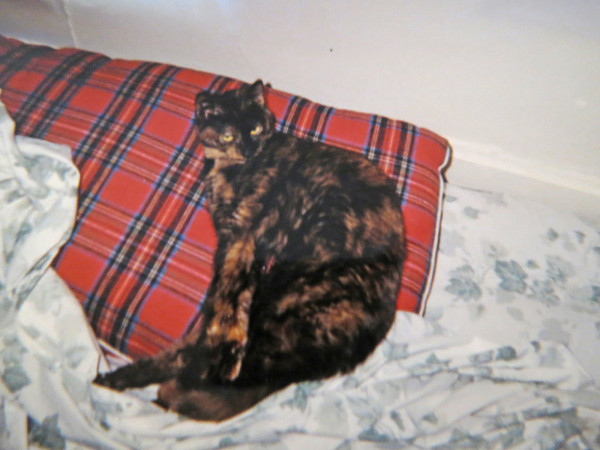 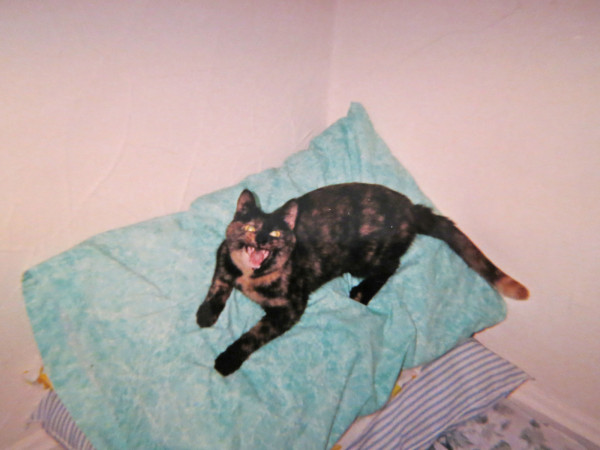 (She looks very fierce here, but she was just talking to me. It's hard to talk to Moly without her talking back.) 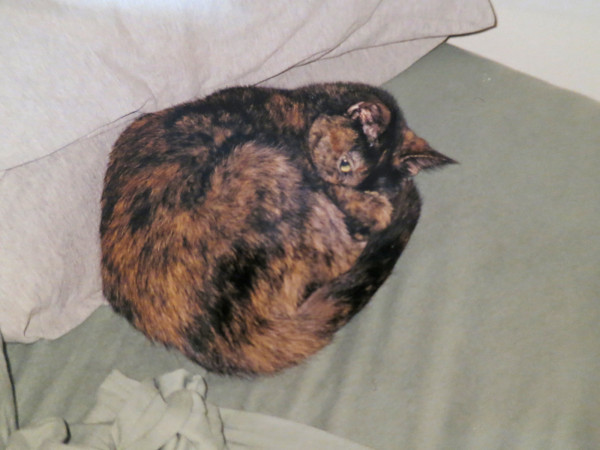 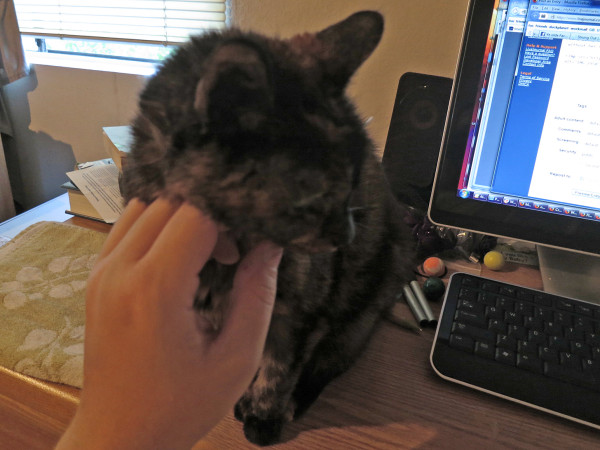