On Sunday's trip to Penasquitos Canyon, our big goal was to find a cache called The Cave of Wonder. It's not really a cave, more like a big overhang, but it's still pretty cool. It's also one of the toughest caches in the canyon, based on elevation/lack of trail/etc, and I was pretty doubtful about my ability to do it at all. But if we wanted to join the Hall of Fame, we'd have to find it.

We parked at a strip mall nearby and found our first cache in the fence of a dog park up the hill. While I was signing in, something buzzed by -- one of these giant green beetles that are blundering around everywhere in the summer. They're pretty neat looking, with brilliant metallic green undersides. I am not unnaturally afraid of bugs; I caught grasshoppers and fireflies as a kid, I rescue spiders from the cats and put them outside, etc. However, I wasn't completely thrilled when this one crashed into my neck (I told you they were clumsy) and hung on with its prickly little feet. Ken was studying it with great interest and I was a bit CAN YOU GET IT OFF ME NOW but when he finally coaxed it off of me I took some glamour shots: 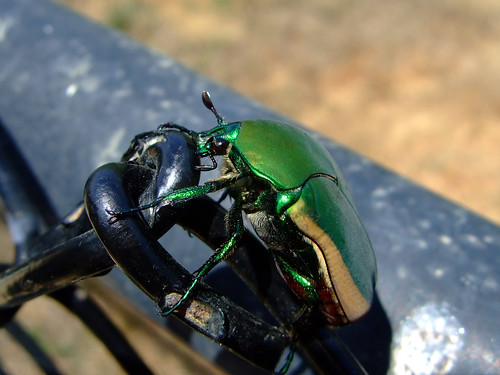 Pretty, isn't it? I know you don't believe me, but this is totally worth viewing at original size on Flickr. You can see the metallic stuff so much better.