On Friday, our main goal was to see the 12:30 Firefly panel. We weren't sure we would be able to get in; more than 5,000 people had indicated interest in the panel online, and the room only holds 4,000 people. It was the most popular panel on the website (and not everybody even uses the website). And it was in the second-biggest room at the convention center.

For extremely popular panels, no matter when they fall during the day, dawn seems to be the best arrival time. Some people camp out overnight, sure, but they don't fill the rooms. But the earliest we could get downtown with public transit was 6:15, and I really wasn't sure that would be good enough. If we didn't get in, though, I figured we could always go to the Venture Bros panel that morning. (I've been to the Venture Bros panel three times, and it's always been great – I regretted having to choose between it and Firefly. But Firefly was a one-time event, and it was Firefly. So it won.)

We'd gotten home from Patton Oswalt around midnight the night before, so we were not going to get much sleep. I planned to check the #b20 hashtag on twitter as soon as I woke up so I could decide whether Firefly was a lost cause. We were half hoping it would be (sorta, kinda) because we really needed more sleep. (We'd still have had to go down earlyish for Venture Bros, of course, but not that early.)

But the line status didn't sound totally hopeless at mumblesomethingbefore5am, so off we went. We just missed a trolley, but a hastily devised alternate plan with a bus still got us there around 6:15, at which point the line was impressively huge but not mind-boggling. It swiftly became mind-boggling; they wove it through a couple of the spare tents for the nearby Hall H line, went down the sidewalk, ran out of room and started switching it back in the street. I guess the lane they were using was closed, but still, packing people INTO THE STREET FOR HEAVEN'S SAKE just seems like a bad idea.

The first panel in Ballroom 20, Community, wasn't until 10:00, but they did make things exciting by moving the line at 7am. Before that, when the line is outside the convention center grounds, it's really the everything-besides-Hall-H line. Once the building doors open, the people redistribute themselves into lines for the exhibit hall, the Hasbro tickets, autograph tickets, Ballroom 20, and whatever other things people find worth lining up for. Problem is, that redistribution is kind of chaotic. Instead of people walking calmly down the hall in the order in which they arrived, it's a free-for-all. You can't run, but when the line spreads out into a great big hallway, people start sneaking ahead of each other and that just sucks. (If everyone were like me, I suppose the convention would be dull, because everyone would show their appreciation by sitting quietly and listening. But by God we would have fair and orderly lines.)

So we ended up somewhat grumpily in the Ballroom 20 line, in a half-assed rough approximation of where we should have been. And then we settled down to wait. We were... something like 3500th in line, I think. The "approximate wait from here is n people" signs were hard to interpret. All I know is that the line went through a bunch of tents and down the steps and THEN there was us. But we weren't all the way out in the marina, so there was that. 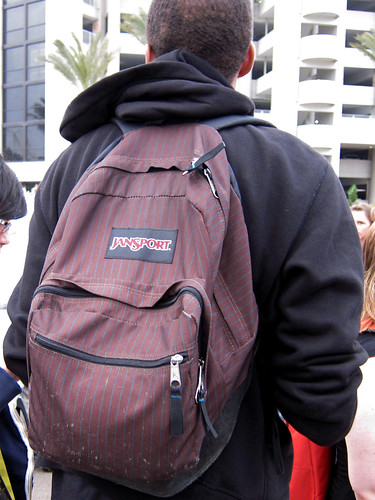 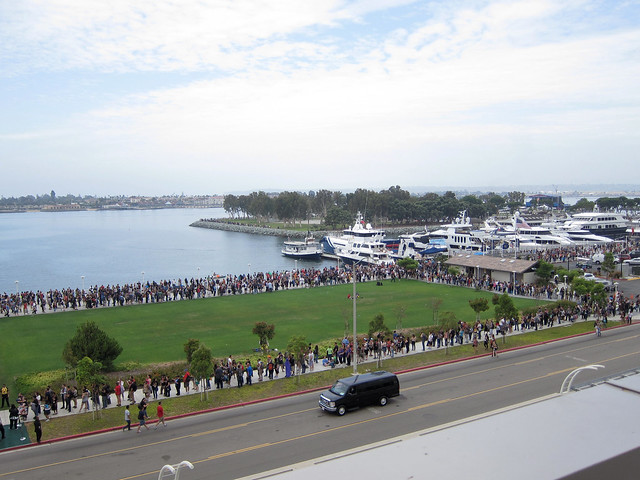 This is the view from the terrace behind the convention center. I think some of that line may be for the Indigo Ballroom at the Hilton; it got very confusing at times, with all the lines converging. But it kind of blows my mind. EVERYTHING EVERYWHERE IS A LINE. (It's most effective at the Large 1600 size, I think.) 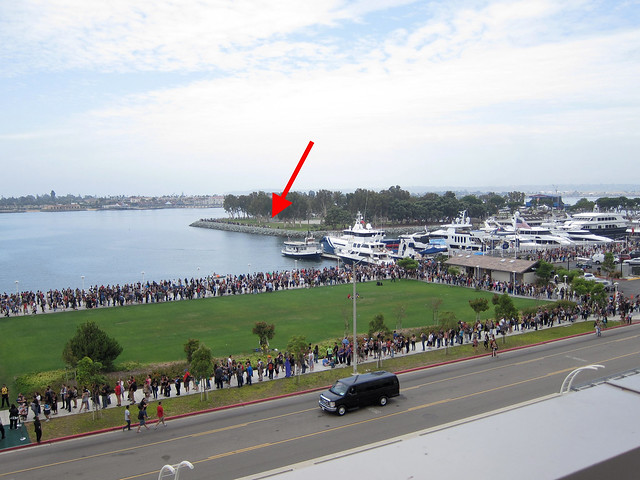 You see those tiny people in the distance? That's the end of the Ballroom 20 line. Seriously. I don't know how much of the foreground is really for B20 – and there was plenty of B20 line you can't see here – but that's the end of it. Someone estimated 10,000 people in line. They might have been full of shit, but it's not totally implausible either.

Those people were not getting in for Firefly.